Full threshold visual field testing up to 30 degrees from central fixation point is achieved on standard iPad (9.7 inch) or 10.5-inch iPad pro by patients changing fixation. For the standard iPad (9.7 inch)4 refixations are made to the 4 corners of the iPad to achieve this eccentricity (see left panel below). This is achieved by following the fixation marker (red target) when directed during the test. The iPad pro is larger and only needs 1 refixation, as directed by the voice instruction.

MRF Visual field can return a 30dB threshold across all locations. MRF can achieve this by controlling the size of the dots with respect to the distance from the centre. In contrast, HFA can provide much larger range of brightness for a fixed size. Calibrations show that the brightness of MRF 30 dB corresponds to about 38 dB on a Humphrey perimeter.

MRF research has measured thresholds in more than 400 cases (124 normal age 19-92; and 280 with eye disease: 92 Glaucoma, age 43-88; 68 AMD, age 62-96; 74 Diabetes, 26-69; 46 Neurological cases age 23-85) and has developed a normative database for the Probability Density Function at each point in the visual field. The fact that our clinical trials show very strong association with Humphrey outcomes indicates that the database is highly accurate.

The normative database comprises people from all ethnicities including about one third as Asians.

MRF uses a Bayesian predictor for returning the visual field threshold given a patient’s response matrix to spots of different brightness. It can achieve results equivalent to standard equipment in 1.5 minutes less test time with a similar level of accuracy.  This approach is similar to that adopted by Humphrey in their testing technique called SITA but it has been optimised to return fast and reliable outcomes.

YES, the MRF uses a blind-spot monitor to gauge fixation accuracy. This procedure is common to most perimeters and it starts the test by locating the person’s blind spot. Thereafter it shows spots in the blind spot with the expectation that they should not be seen if fixation is accurate. In our printout the blind spot is shown as a large gap in the graphic.  I have shown it as a RED triangle in the below cases to help visualise its location. In some patients the blind spot cannot be detected reliably, and this is recorded on the printout. 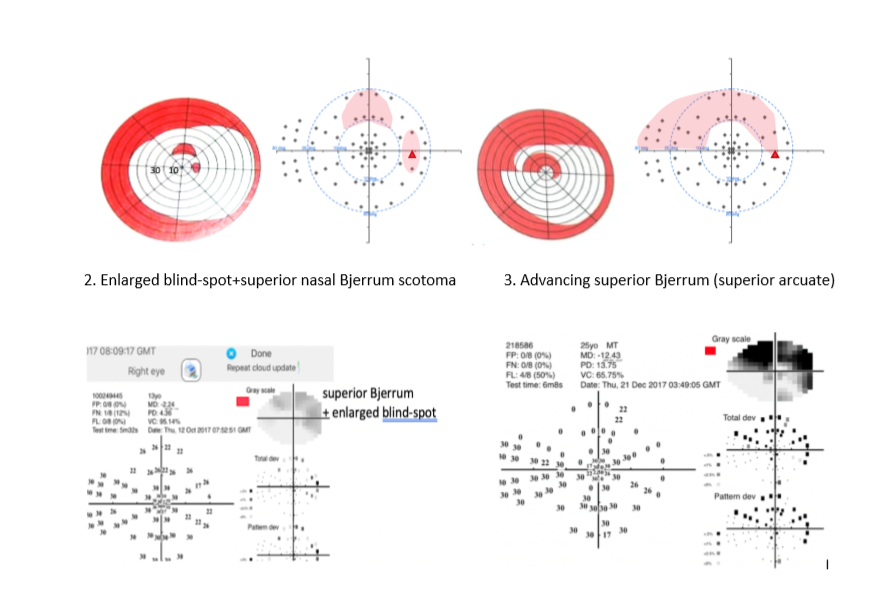 Current generation of perimeters do not include enhancements learned over the past 30 years. In fact, the grid and test approaches (spot size) are the same as those of the past. In this aspect nothing has changed, and we are still using the dated approaches of Goldmann.

There is now a large body of evidence that shows that the standard (24-2 and 30-2) grids under-sample the macula, the region of highest density of retinal ganglion cells, so in many cases clinicians need to put patients through a second test, the 10-2. What a pain for both the patient and the clinician.

Carl Zeis recently addressed macula under-sampling by developing 24-2C grid. The new grid has an extra 10 points within the central 10 degrees for a total of 22 macula test points. However, this compares poorly to the 68 points of a 10-2 grid over the same area.

24-2C has been optimised for glaucoma but will they cope with the more common causes of central vision loss such as AMD or macular oedema?

Since vision loss varies with disease, MRF is optimised to include four grid patterns specific to glaucoma, maculopathy/AMD, diabetes and neural diseases.

The novel implementations in these designs are a spot size that increases with eccentricity to reduce threshold variability: an expanding test grid to define edges of vision loss and a Bayes threshold predictor with neighbourhood logic to return fast, reliable thresholds (2-3 minutes).

At present the MRF uses a blind-spot monitor to detect fixation loss (see above point 5).

For those who are interested, an independent clinical trial performed in Sydney by Dr Stuart Grahams group reached the below conclusion

Yes, the MRF has been used extensively by Dr Viney Gupta and his team (Dept of Ophthalmology (R.P.C) AIIMS, New Delhi). His findings on 21 glaucoma adults have been published as part of a large clinical trial including 39 cases tested in Cambridge UK and his recent work on 43 eyes of 26 children with congenital glaucoma are presently being analysed. We will forward copies of publications on request.

Adults with Type 2 Diabetes Mellitus” and is available on request.

Low Luminance Low Contrast (LLLC – labelled ‘Low contrast Snellen’) is expected to be 6/12 or better for healthy macula and retinal function. The Smith–Kettlewell Institute Low Luminance (SKILL) Card has been used in patients with type 2 diabetes mellitus (T2DM) and been found to have a high sensitivity to abnormal retinal function caused by diabetes. The LLLC charts can be used to evaluate the impact of reduced contrast and reduced luminance on visual acuity.

LLLC vision testing has been found to predict subsequent acuity loss in an aged population as per research. Tests of low contrast spatial vision are strong predictors of early retinal dysfunction. These findings have implications for clinical trials, clinical management, and acceptance of these measures into clinical practice.

in an aged population: the SKI study” and the research paper is available on request.

Patients with early diabetes show a loss of
sensitivity across the visual field. 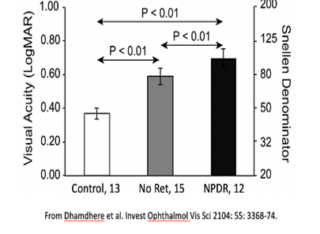 The specific tests for Diabetes related eye issues are: